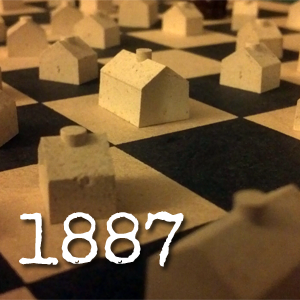 1887 is a minimalist board game that attempts to capture the tensions of exploitation and enclosure of the American West.

The Western open-range tradition originated from the early practice of unregulated grazing in newly acquired western territories, which was codified in the laws of Western states as they developed written statutes. Over time, as the Western lands became more developed (railroads, mining, farming, etc.) the open range laws started to be challenged and were significantly curtailed. As the landscape began to fill up with homesteadders there were increasing tensions between the new residents and the open-range cattle ranchers they were displacing. The late 1880's was a boiling point for many of these tensions. At points open combat between private militias broke out over water and grazing rights. These conflicts became known as the "Range Wars".