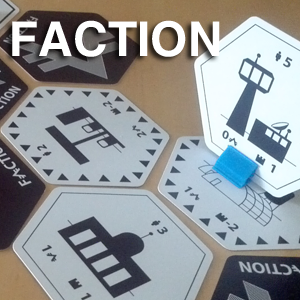 Play is divided up into a series of skirmishes. For each skirmish players risk tiles which become either the play-field or the survivors fighting over it. At the end of each skirmish each player gets to keep whatever tiles they took from the other player.

Drawing elements from Poker, Risk, Carcassonne, and Magic: the Gathering, Faction demands a complex multi-tiered strategy. While it's procedural boards require players adapt to changing conditions with every skirmish.